PATRIARCH OF THE RUSSIAN ORTHODOX CHURCH

"The most important part of the mission of the Church has remained unchanged since the time of the apostles - to bear witness to our resurrected Lord and Savior Jesus Christ, to the eternal and unchanging moral law that God has placed in the hearts of mankind."

His Holiness Patriarch Kirill of Moscow and All Russia

His Holiness Patriarch Kirill of Moscow and All Russia (secular name - Vladimir Mikhailovich Gundyaev) was born on November 20, 1946 in the city of Leningrad (Saint Petersburg). His father, Mikhail Vasilievich, was a priest, his mother, Raisa Vladimirovna, was a school teacher who taught German. His grandfather, Priest Vasily Stepanovich Gundyaev, was imprisoned and exiled for church activities and the struggle against renovationism in the 1920s and 1940s, and was a prisoner of Solovki.
After graduating from high school in 1965, Vladimir Gundyaev entered the Leningrad Theological Seminary, and then the Leningrad Theological Academy, which he graduated with honors in 1970. The future Patriarch was tonsured into monasticism on April 3, 1969 by the Metropolitan of Leningrad and Novgorod Nikodim (Rotov) with the name Kirill. On April 7 of the same year, he was ordained a hierodeacon, and on June 1 - a hieromonk.

In September 1971, Hieromonk Kirill was elevated to the rank of archimandrite, and for the next four years was the representative of the Moscow Patriarchate at the World Council of Churches in Geneva. At the age of 29, on March 14, 1976, Archimandrite Kirill was consecrated bishop of Vyborg, and on September 2, 1977 he was elevated to the rank of archbishop.

For ten years, Bishop Kirill was rector of the Leningrad Theological Academy and Seminary, and in December 1984 he was appointed Archbishop of Smolensk and Vyazemsky.

Since 1986, Archimandrite Kirill was the administrator of parishes in the Kaliningrad region, and in 1988 he became archbishop of Smolensk and Kaliningrad. The future Patriarch headed the Smolensk diocese for 25 years. Under his leadership, the surrounding Kaliningrad region was included into the diocese, where practically form the ground up, the first orthodox churches began to appear and Orthodoxy continued to spread. As a result, a seminary was opened in Smolensk, Orthodox grammar schools appeared in the diocese, and 165 new parishes were opened.

On February 25, 1991, Archbishop Kirill was elevated to the rank of Metropolitan. Along with the administration of the Smolensk diocese, Metropolitan Kirill served the Church as an diplomat of the Church and a theologian.

He regularly delivered lectures, including in Western universities, participated in inter-Christian dialogue, and repeatedly met with leaders of other Christian confessions and with leaders of foreign states.

From November 1989 to 2009, he was Chairman of the Department for External Church Relations and a permanent member of the Holy Synod.

As the head of the Department for External Church Relations, Metropolitan Kirill took an active part in the reunification of the two branches of the Russian Church. He also led the preparation of two important documents that determined the position of the Church regarding the most important social and political challenges of the 21st century - "Fundamentals of the Social Concept of the Russian Orthodox Church" and "Fundamentals of the Teaching of the Russian Orthodox Church on Human Dignity, Freedom and Rights."

In the course of his ministry, Metropolitan Kirill took an active part in peacekeeping actions in the former Yugoslavia. During the war, he repeatedly visited Belgrade, negotiated with the leadership of Serbia, initiated the creation of an informal international Christian peacekeeping group for Yugoslavia in May 1999.

Since 1994, Metropolitan Kirill has been the author and host of the weekly television show The Word of the Shepherd on Channel One in Russia.

As chairman of the Commission of the Holy Synod for the revival of religious and moral education and charity, he initiated the creation of Synodal departments for religious education, social service and charity, and for cooperation with the armed forces and law enforcement agencies. He was the author of the Concept for the revival of charity and religious education, adopted by the Holy Synod on January 30, 1991. In 1994 he developed and submitted the Concept of Interaction between the Russian Orthodox Church and the Armed Forces for approval to the Holy Synod.

After the death of His Holiness, Patriarch Alexy II, on December 6, 2008, Metropolitan Kirill of Smolensk and Kaliningrad, out of seven permanent members of the Holy Synod, was elected locum tenens of the Patriarchal throne.

On January 27, 2009, the Local Council of the Russian Orthodox Church, by secret ballot, elected Metropolitan Kirill as Patriarch of Moscow and All Russia.

His Holiness Patriarch Kirill is a doctor of theology, an honorary professor at a number of religious and secular universities in Russia and in the West, the author of several books and more than 700 publications on various issues of church life. He holds high ranking state awards, as well as awards of the Russian Orthodox Church and awards from many Local Orthodox Churches. 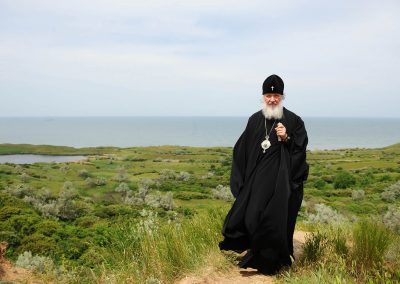 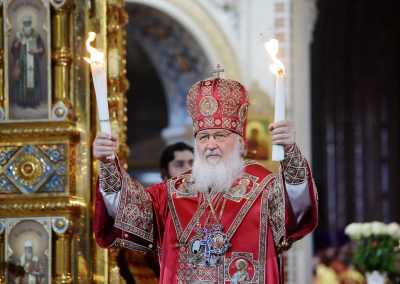 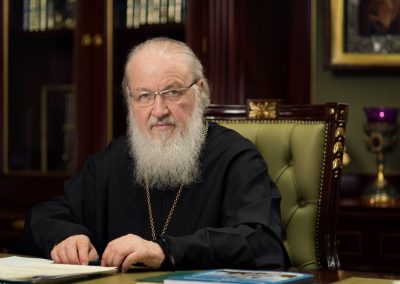 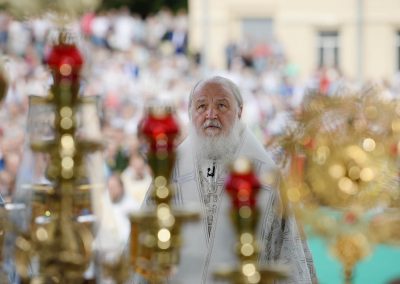 LATEST NEWS FROM THE OFFICIAL WEBSITE OF THE MOSCOW PATRIARCHATE