REPRESENTATION OF MOSCOW PATRIARCHATE IN THE USA
"Every person, regardless of his or her political views, has the right to be an Orthodox Christian. And the pastoral responsibility of the Church extends to each person. Approaching a church, no one should have to ask themselves: will I find the people inside to be my enemies or my friends, will they offer support or will they be my political opponents?"

The first Orthodox parish on the east coast of North America originated in New York in 1870.

The parish, located in a private house on Second Avenue, was visited by Greeks, Serbs, and Syrians, but mainly by employees of the consulate of the Russian Empire. The church was even called "consular". In 1894, Bishop Nicholas of the Aleutian Islands and Alaska founded a new home church in New York, consecrated in honor of St. Nicholas the Miracle Worker of Myra in Lycia.

At the end of the 19th century, when the flow of immigrants from Russia significantly increased, and the modest size of the home church was no longer suitable to accommodate everyone who wished to attend services, its rector, the future Hieromartyr Archpriest Alexander Hotovitsky, raised the issue of building a large cathedral in New York. With the blessing of the newly appointed Bishop of the Aleutian Islands and Alaska, Tikhon, later the Patriarch of Moscow and All Russia, in September 1899 a specially established committee acquired a plot of land of 150 yards on East 97th Street, between Madison and Fifth Avenue, worth 72 thousand rubles. On this site, it was planned that a church would be built that would accommodate 900 people, along with a building for a Sunday school, a hall for celebratory meetings, and apartments for clergy. The construction cost was estimated at 114 thousand rubles or 57 thousand US dollars.

Two months later, the Holy Synod received the Highest permission of the Emperor Nicholas Alexandrovich to collect the necessary funds. To accomplish this, in February 1900, Father Alexander Hotovitsky went to Russia as chairman of the construction committee.

The first installment for the construction - 5 thousand gold rubles - came from the Emperor Nicholas II himself.

Invaluable prayer and moral support was provided by the deeply revered Father John of Kronstadt - on the first page of a specially established book for recording donations, he, having contributed 200 rubles, wrote: "Bless, Lord, this book and the work for which these donations are requested ..."

Many Orthodox Christians followed the example of the Royal Family and the hierarchs of the Church. In Russia, often after the addresses of Father Alexander Khotovitsky were sounded from the pulpits of churches, the faithful donated their personal earrings, rings, necklaces, and bracelets. However, the funds that were raised were not enough. Then, by a special resolution of the Holy Synod, on the day of the celebration of the Baptism of the Lord in 1901, a collection of donations was announced in all the churches of Russia for the benefit of the construction of an Orthodox church in New York. 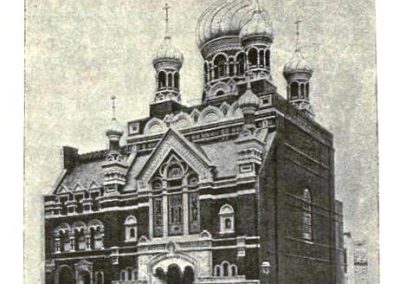 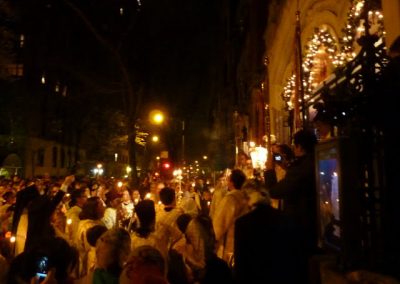 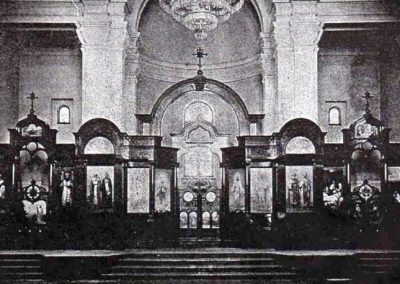 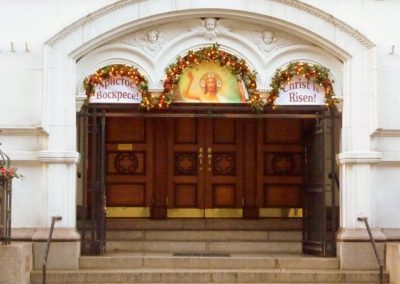 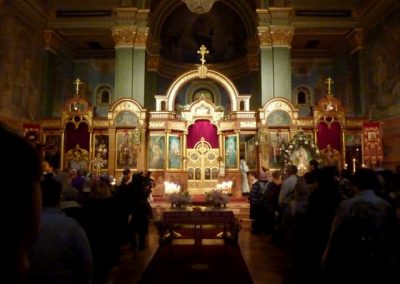 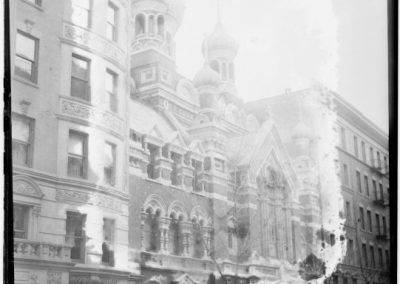 The cornerstone of the cathedral’s foundation

was installed on May 9th, 1901 (May 22 according to the new calendar), the day of the Transfer of the relics of St. Nicholas the Wonderworker. All along the procession from the church on Second Avenue to 97th Street, houses along the way were decorated with Russian and American flags. Bishop Tikhon blessed the cornerstone in the presence of thousands of believers. Present were also representatives of the Russian embassy who arrived from Washington, led by Count Cassini, Consul General Teplov in New York, officers and sailors of the battleship Retvizan under construction in Philadelphia, and the Mayor of New York, Seth Lowe.

A year and a half later, the best American construction company of that time, John Downey and Sons, under the supervision of architect Bergessen, erected the building of St. Nicholas Cathedral. The first service in the newly built church took place on November 23rd, 1902 (10 according to the new calendar).

According to eyewitnesses, it was attended by at least two thousand believers (twice the projected capacity), and at least one thousand worshipers stood in the street. In his sermon, addressing all those present, Bishop Tikhon said: "... In this great city a church has been erected, worthy of the Russian nation and corresponding to the greatness of the Orthodox faith."

A welcoming telegram on the occasion of the consecration of the first Russian Orthodox cathedral in New York was received from Livadia from the Emperor Nikolai Alexandrovich.

In 1905, Bishop Tikhon, elevated to the rank of archbishop, relocated his residence and the administrative center of the diocese from San Francisco to New York City. From that point on, Saint Nicholas Cathedral become a cathedral, taking on the mission of the spiritual center of Russian Orthodoxy in North America.

«In this great city a church has been erected,
worthy of the Russian nation and corresponding to the greatness of the Orthodox faith»

HOLY OBJECTS OF THE CATHEDRAL

For over a hundred years of its existence in New York, St. Nicholas Cathedral has become a temple enriched with prayer, in which many holy objects are kept:

1. Reliquary, which in 1901 was sent to the cathedral as a blessing from the holy Mount Athos;

2. The icon of St. Tikhon with a particle of his holy relics presented to the Cathedral by His Holiness Patriarch Alexy II on the day of the 90th anniversary;

3. The stained-glass window of the Resurrection of the Lord located in the center of the Exterior wall of the church, behind the altar, presented to the cathedral in memory of Varvara Nikolaevna Mak Gakhan (birth name Elagina), a long time volunteer of the church in 1907;

4. Larger processional Altar cross, from the battleship "Retvizan" - the company of "Varyag" and "Retvizan" were the first parishioners and the first donors to the fund for the construction of the cathedral; both battleships were sunk at Port Arthur in 1904;

5. "Golgotha", a large worship crucifix of Christ (the work of A.A. Neratov, a gift from emigrants in the 1950s.

An event that reflected the cultural significance of the cathedral dates back to 1973, when it became an architectural monument in New York, and the City's Architectural Society attached a bronze plaque to the wall with outlining the uniqueness of the building.

In 2000, due to the dire condition of the building, major repairs and restoration work began and were completed in 2002 to celebrate the centenary of the cathedral.